Orpheus in the Underworld

In Jacques Offenbach's Orpheus in the Underworld, the audience can laugh about dreary marriages as well as about screwed-up gods and a party-addicted underworld. This comedic masterpiece is far removed from the lofty mythic world of earlier settings. First performed in 1858 at the Bouffes-Parisiens theatre in Paris, it heralds the dawn of a new world, the world of operetta, of which Orpheus in the Underworld is still considered the cornerstone today.

The old gods as well as the human couples have become henpecked heroes: Orpheus is a boring music teacher and Eurydice his wife who is annoyed by him. When Eurydice dies and goes straight to the underworld, nothing could please her husband more! Were it not for public opinion, which compels Orpheus to reclaim his wife from Jupiter, the father of the gods, in Olympus. Bored with nectar and ambrosia, the entire family of gods is taken to the underworld, where one of the most famous pieces in music history awaits with the so-called Cancan.

How funny can operetta be today? This question is answered by Spymonkey (Aitor Basauri, Toby Park), Britain's leading physical comedy and modern day clowning ensemble. Orpheus in the Underworld marks the group's first production at an opera house.

"The work fits perfectly with our comedic language," says Toby Park, one of the artistic directors. And if you think you have already experienced the Volksoper ensemble in all its facets, you are mistaken, because in Orpheus in the Underworld it unfolds its true clown potential! 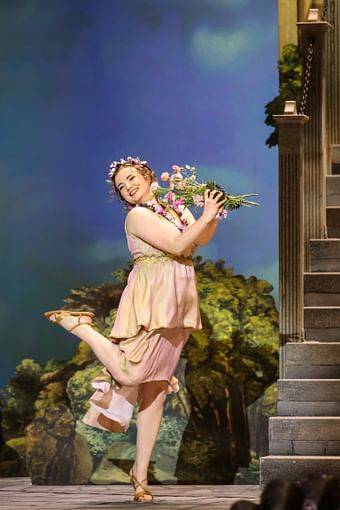