For the new production of La bohème, the Volksoper Wien presents Harry Kupfer's long legendary production, which he staged at our house in 1984 and which was praised above all for its phenomenal direction of the characters. To bring this to life requires an outstanding ensemble, and this is certainly available in the new production.

As Mimì, for example, you will experience the world-renowned soprano Anett Fritsch alongside Rebecca Nelsen, who the Volksoper audience has long grown fond of through her numerous roles at our house. Anett Fritsch made her debut at the Salzburg Festival as Donna Elvira, a role she has also sung at other major opera houses from La Scala in Milan to the Teatro Real in Madrid. She also attracted attention with her Fiordiligi in Così fan tutte; this celebrated production by movie director Michael Haneke, conducted by Sylvain Cambreling, premiered at the Teatro Real, made a guest appearance at the Wiener Festwochen and is also recorded on DVD. Anett Fritsch also celebrated great personal success at the Glyndebourne Festival in Handel's Rinaldo. At the Volksoper she made her debut as Pamina in Mozart's Die Zauberflöte, and now she is devoting herself to the terminally ill Mimì at our house.

Her lover Rodolfo is also one of the most sensational voices of our time, the Italian tenor Giorgio Berrugi. He made his debut as Rodolfo at the Teatro la Fenice in Venice shortly after completing his vocal studies, quickly followed by appearances at the great houses from the Royal Opera House to the Opéra National in Paris. As Pinkerton in Madama Butterfly, Giorgio Berrugi performed at the New York Met, among other places, and now he is on stage at the Volksoper - alternating with JunHo You - as Rodolfo.

The rest of the ensemble also consists of remarkable names: Andrei Bondarenko, for example, has already sung the role of Marcello at the Royal Opera House and in Glyndebourne; at the Volksoper he alternates with Alexandre Beuchat. Lauren Urquhart - who has just been celebrated at the Volksoper in La Cenerentola - and the young Australian soprano Alexandra Flood, who was a member of the Salzburg Festival's Young Singers Project in 2014 and has since celebrated successes in opera, operetta and musicals, will be on stage as Musetta. 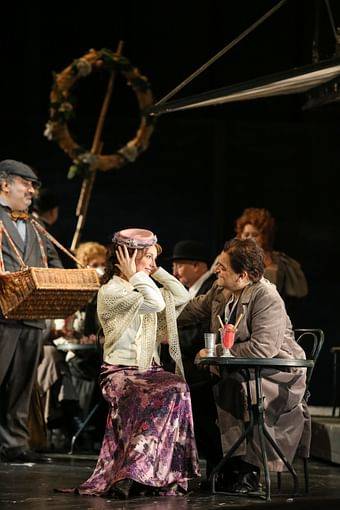