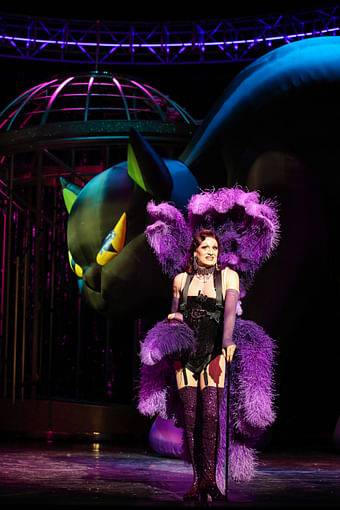 Albin aka Zaza is the star of a nightclub in St. Tropez, Georges is the club owner. Together they make a charming couple. Georges’ son from a previous indiscretion turns up and announces to his dad that he wants to marry none other than the daughter of a local conservative politician. Misunderstandings and disguises are inevitable, just like the entertaining and happy ending.

Nightclub
We find ourselves at La Cage aux Folles, a nightclub in St. Tropez. Its owner Georges presents his birds of paradise, the Cagelles (We Are What We Are). There’s just one problem: Albin, the highlight of the evening programme as Zaza and Georges’ partner off the stage, is nowhere to be seen …

Apartment
Georges finds Albin in their exceedingly colourful apartment located next to the club. The exalted star has a fit of jealousy and Georges must go to great lengths to calm him down. Albin prepares himself for the show and with each application of eyeliner he regains his confidence. It’s goodbye Albin and hello Zaza as she takes to the stage (Mascara).

Jean-Michel, Georges’ son from a previous "lapse", shows up and tells his dismayed Papa that he wishes to marry. Anne, his number one girl, is the daughter of ultra-conservative politician Edouard Dindon, an MP for the Tradition, Family and Morality Party. Anne will arrive with her parents the next day to meet Jean-Michel’s family, which is why he would like the interior design of the apartment to be "toned down" and for Albin to stay away. Jean-Michel lauds his newfound happiness (With Anne on My Arm) and goes one further: he wants to invite his biological mother Sybil, who he hasn’t seen in twenty years.

Seaside promenade
Georges tells the horrified Albin about the planned wedding and the impending visit of Jean-Michel’s mother. But he can’t bring himself to ask Albin to stay away for a few days. Instead, he declares his love for him (Song on the Sand).

Nightclub
The Cage of Fools is crackling with anticipation: the "little boy" is getting married! Jean-Michel has ordered a removal van to clear out Papa’s apartment and give it a suitably "gentrified" appearance. Meanwhile, the unsuspecting Albin performs his big show as Zaza (La Cage aux Folles).

Backstage / onstage
Albin finds out between performances that his company is not desired when the Dindons come to visit. Deeply hurt, though utterly professional, Zaza returns to the stage (I Am What I Am).

Bistro
Albin has spent the whole night wandering restlessly through the city, accompanied by Jacob the butler (although he refers to himself as the “maid”). Georges tries to make it up to Albin once again and suggests he could present himself to the Dindon family as "Uncle Albert". Georges coaches him in how to behave like a "proper man". But will this Masculinity rub off on Albin?

Apartment 2.0
Georges and Albin’s apartment has been converted into a space which seems nothing short of sacred. Jean-Michel becomes angry when faced with the presence of "Uncle Albert" since his wishes are ostensibly not being respected. Georges reminds him that it is Albin who has earned respect for raising Jean-Michel at great personal sacrifice (Look Over There).

A telegram from Sybil arrives: she won’t be able to join them. Anne and her parents, meanwhile, arrive ahead of schedule. Much small talk ensues, during which everyone voices their opinions (Cocktail Counterpoint).

To everyone’s surprise, the supposedly unavailable mother turns up after all: it’s none other than Albin, all dressed up for the occasion. Quite the lady of the house, he valiantly takes the situation into his own delicate hands and attends to the guests.

Chez Jacqueline
At the restaurant of his former colleague Jacqueline, Albin is encouraged to perform a song and give it his all (The Best of Times). Everyone gradually joins in. At the end of the song, Albin does what he habitually does on stage and tears the wig from his head. Edouard and Marie Dindon are horrified – how did they end up here?

Apartment 2.0
The shocked political couple want to leave this "hotbed of sin" right away. Their courageous daughter stands by her fiancé and Jean-Michel stands up for his family. Jacqueline has gathered photographers and the press in front of the apartment to spark off a scandal. There’s no way Dindon will escape unrecognised, so he will have to go along with the revelry…

Nightclub
… Curtain up for the Finale!

Smirk or giggle, pat your knee or have a good old laugh, these performances will train your humour muscle. Life out there is serious enough as it is.
Further productions
What could be better than shedding a tear at the opera? Or even two. Or three. Love's pain and bittersweet melancholy, guaranteed to leave no eye dry.
Further productions
Let's face it, sometimes we all crave for it. Glitter, fancy costumes and dance numbers. These productions are pure entertainment!
Further productions