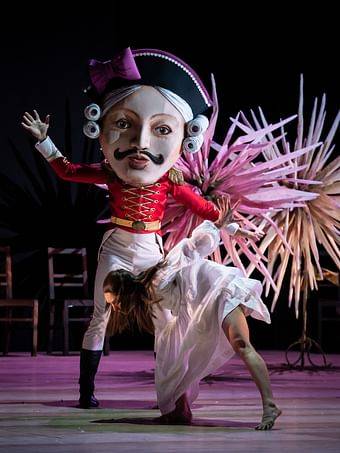 A poetic family performance for children and adults, combining dance and song with imaginative costumes, a seven-headed Mouse King in the snow and a utopian ending. Lotte de Beer, Omer Meir Wellber and Andrey Kaydanovskiy present an evening of two of Tchaikovsky's masterpieces: the opera Jolanthe and the ballet The Nutcracker.

Jolanthe is a blind princess. A famous doctor is able to cure her, but only after she has been told about her blindness. Her father, however, does not want to break this news to her, to spare her pain at any cost. An unexpected visitor, the future lover, explains to the princess what it means to be able to see. Not only in Jolanthe does a rift through the ordered structures of childhood lead to a new world, but also in Tchaikovsky's ballet: a girl recognises a prince in the Nutcracker, with whom she sets off on a dream journey to a fairytale land of milk and honey.

The Volksoper interweaves the two works into a story about growing up and learning to see the world as it is. The Nutcracker music and the dancers of the Vienna State Ballet show us the world of Jolanthe's inner eye. "There comes a time in life when you have to decide whether you want to remain a blind princess or see the world in all its imperfection," says Lotte de Beer.

From the Vienna State Ballet, the dancers of the corps de ballet can be experienced as flowers, candys, soldiers, mouse kings and snowflakes.

Princess Jolanthe is blind. Her father, King René, keeps this a secret from her. She lives in a walled garden, cared for by a well-functioning court.

Jolanthe has a great gift of imagination. In her mind's eye, she sees herself growing from a little girl into the teenager she is today, in the midst of a fairy tale world that seems completely real to her.

The little girl she was, is becoming more and more distant from her. Jolanthe wonders why her life is no longer as carefree as it used to be. She suspects that she is missing something, but she doesn’t know what it is.

Jolanthe is cared for by her nurse and two companions, who protect her from any missteps or pain. They put her to sleep. Jolanthe dreams of a fairy tale landscape with a prince in the shape of the Nutcracker.

Almerik, the king’s new armour-bearer, is warned by Bertram and Martha not to exchange so much as a word with Jolanthe. The king arrives accompanied by Ibn Hakia, a doctor who is to examine her. For Jolanthe’s healing, the king is willing to make any sacrifice.

In her dream, Jolanthe sees how oppressive she experiences her father’s protection. He appears to her as a threatening mouse king. The doctor Ibn Hakia explains that Jolanthe will only see, if she realises that she is blind and has the desire to see entirely on her own. Mind and body are interdependent, he says. The king thinks the risk is too high and refuses the treatment. Jolanthe’s imagined world turns into a nightmare in which men become frightening figures.

Robert and Vaudemont are on their way to King René’s court, Robert is to be married to Jolanthe. He does not want to marry Jolanthe because he is in love with another woman. Robert and Vaudemont get lost. They find the walled garden and ignore the warning that anyone who enters it is doomed to die.

Vaudemont discovers the sleeping Jolanthe without knowing who she is and falls in love instantly. Robert is convinced that she is an enchantress and leaves to get help.

Jolanthe offers wine. Vaudemont wonders whether the wine is poisoned. While Vaudemont drinks his wine, Jolanthe sees a love scene in her imagination.

Once again we see Robert going to get help and Vaudemont drinking the wine. But this time Jolanthe and him have a conversation. Vaudemont asks her to give him a red rose as a souvenir. When she offers him twice a white one instead, he realises that she is blind. Vaudemont explains to her what light and sight are. These first experiences of love are not fabulously beautiful for Jolanthe, but deeply confusing, unsettling and painful.

The court and the king find Jolanthe together with Vaudemont. Jolanthe reproaches her father for never having told her the truth about her blindness. She says she will undergo treatment if her father wishes. At that point, Ibn Hakia threatens to give up the possibility of a treatment.

All of a sudden, the king sees his opportunity: He addresses Vaudement, points out the warning that intruders would be killed and announces his death sentence. No one, apart from the doctor, can understand this cruel punishment from the benevolent king. Jolanthe urges the doctor to treat her. She is willing to do anything to save Vaudemont’s life. Through her inner eye, we see Jolanthe confront and overcome her fears.

When Robert returns to save his friend Vaudemont, he recognises King René. Vaudemont realises that he is in love with his friend’s fiancée. Robert confesses to the king that he does not want to marry Jolanthe. The king agrees to the marriage between Vaudemont and Jolanthe. Bertram appears and reports that the treatment was a success. Jolanthe sees! The world has changed. Jolanthe does not know what she sees. Everyone praises God, including Jolanthe who is happy with Vaudemont.

Jolanthe thinks back to all her struggles and decides to recolour reality using her imagination.

Trailer Jolanthe and the Nutcracker

Volksoper director Lotte de Beer, music director Omer Meir Wellber and choreographer Andrey Kaydanovskiy combine Tchaikovsky's opera and ballet into a narrative about growing up, a poetic family performance for children and adults, between dance and song, with costumes full of phantasy, a seven-headed Mouse King in the snow and a utopian ending. Have a look at our trailer!