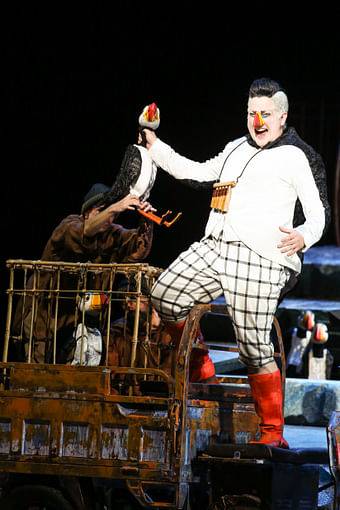 In German language with English surtitles

In German language with English surtitles

"The Magic Flute" is a piece of collective cultural heritage and the most frequently performed opera in existence. Mozart’s universal opus is a fixture in the Vienna Volksoper’s repertoire.

Henry Mason’s new staging and the new musical interpretation by Anja Bihlmaier invite us to take a fresh look at the opera which we think we’re long familiar with.

Act 1: Deceptive calm following a storm at sea in Sandviken Bay. The Norwegian Captain Daland is angry: shortly before he and his team were able to reach his home harbour, his ship was once again driven off course. Now they will have to wait for a favourable wind, and so the entire crew settles down to rest. Only the steersman takes the watch and – to help fight his fatigue – sings
a song full of longing to his distant beloved.

When the storm rises again, a ghostly ship is seen approaching on the horizon, with black masts and blood-red sails. A dark figure emerges into the solitary night: it is the Flying Dutchman. Cursed by the devil long ago for a sailor’s oath he swore, he now wanders endlessly over the seas of the world, seeking but never finding death. Only one glimmer of hope remains in his restless soul: to obtain redemption, he is allowed to come on land once every seven years in order to find a woman who will love him with unconditional faithfulness. But he has never found such a woman.

When Daland returns from his cabin, he sees the strange ship. In a conversation between the two ship commanders, the Dutchman gives the Norwegian merchant some idea of his immeasurable wealth. The homeless Dutchman offers Daland costly treasures in return for “shelter for one night”. It is not just possessions that are negotiated, however. The Dutchman elicits the information that Daland has a “faithful child”, his daughter Senta ... the Dutchman is filled with a new impulse of hope, and together they make ready to depart.

Act 2: A group of women in Daland’s house are awaiting the return of their fathers, husbands and fiancés. Senta sits alone, not wanting to join in with the pastimes of her nurse Mary and the other girls. Entirely absorbed in her thoughts and visions, she finally sings a ballad that tells the story of the mysterious Flying Dutchman and the terrible fate he suffers. She fantasises that it could be her destiny to reverse the cursed man’s fate, and this causes an ecstatic joy to arise in her. Not only are the listening women horrified, but also Erik, who believes that Senta has agreed to marry him. At the news that Daland’s ship has come home, the women depart for the harbour. Erik holds Senta back by telling her of a warning dream he has had, and he tries to bring her back to reason. But he is forced to see that the dream he has related is only feeding the fire of the young woman’s obsession. Erik rushes away in despair.

At this point the Dutchman appears before the dreaming Senta, and the story becomes reality. Daland is irritated that Senta does not seem pleased to see him again, and tries to explain the reasons why he is giving shelter to the stranger. However, neither this nor Daland’s presentation of the stranger to Senta is necessary. Senta knows very well who the man standing before her is. Left alone, the two express their reciprocal vow of fidelity.

Act 3: In the harbour, people are celebrating the return of the seafarers, while the Dutchman’s ship, shrouded in gloom, lies at anchor and there is no sign of life to be seen on it. The cheerful Norwegian sailors encourage the crew of the strange ship to join in their celebrations. There is no response. Gradually the fear spreads that the ship is a ghost ship. Shortly afterwards, strange natural forces assert themselves, and an inexplicable ghostly chorus suddenly sings out. This seems to confirm the men’s suspicions.

Senta hurries to the harbour, pursued by Erik, who tries once again to appeal to her reason as well as reminding her of the promise of fidelity she once gave him. Overhearing the exchange between Erik and Senta, the Dutchman thinks that he has been deceived, and his hopes of redemption seem dashed. In spite of this it is not his own hopeless fate that most distresses him: he wants to release Senta from her vow so that he will not drag her down with him. But Senta has already made her own decision …